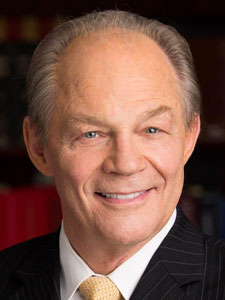 Gregory A. Yates grew up a “strat brat” as an air force son at Ellsworth, SD and graduated from the University of South Dakota school of law in 1972. Since that time he has been at the center of high profile litigation and has been recognized for his skills as a trial attorney. He was at the center of litigation that helped South Dakota and other tribes recover over $100,000,000 in funds that were mismanaged by the Bureau of Indian Affairs, and has recovered hundreds of millions of dollars for injured victims.

He represented 60 individuals in suits against the Los Angeles Police Department where he uncovered the corruption of the Rampart division of the department in framing individuals for many different crimes.

He has received recognition for motor vehicle defect cases and other product liability cases where his work resulted in manufacturers actually recalling and fixing or reengineering dangerously defective products. He has also been successful in bringing complex catastrophic injury cases including over 100 traumatic brain injury cases.

“I was very pleased with both Mr.Yates services and the outcome of my case.”
— Carlos
see more quotes

“I believe that no other attorney would have handled it better than Mr. Yates.”
— Arshak
see more quotes